Stereotypes of divorce have historically included hysterically thrown dishware, screaming matches in lawyers’ offices, and using children as pawns. However, as I discussed last week in “The New Push for Amicable Divorces,” divorce selfies, platonic parenting, and conscious uncoupling have become immensely popular. As a result, more people are yearning to have a pain-free divorce and begin their new life on a positive path.

Is this trend of pain-free divorce evident all over the country? CompleteCase.com conducted a study to learn where in America divorces were most amicable. The online divorce document company ranked states as having “amicable,” “cordial,” or “disagreeable” divorces. The ranking was calculated by comparing couples in each state who declared they were in agreement with each other in terms of parting ways and dividing up assets against couples who were not in agreement with each other. Where are the states with the good, the bad, and the ugly divorces?

The Good: Georgians take a sigh a relief. Even if your marriage is falling apart, there’s a good chance you can get through a divorce without breaking some plates. Surprisingly, one-fifth of the states in the U.S. were ranked as having amicable breakups. The state most likely to have amicable divorces was the maple-producing state of Vermont.

The Not-So Bad: The majority of states, 40 to be exact, including Georgia, are likely to have “cordial” breakups.

The Ugly: Ten states across the U.S., including many Southern, Midwestern, and Western states, are most likely to have a disagreeable divorce. If you call Alabama home, you are more likely to have a painful divorce than anywhere else in the U.S.

Where in America is Divorce Most Amicable? 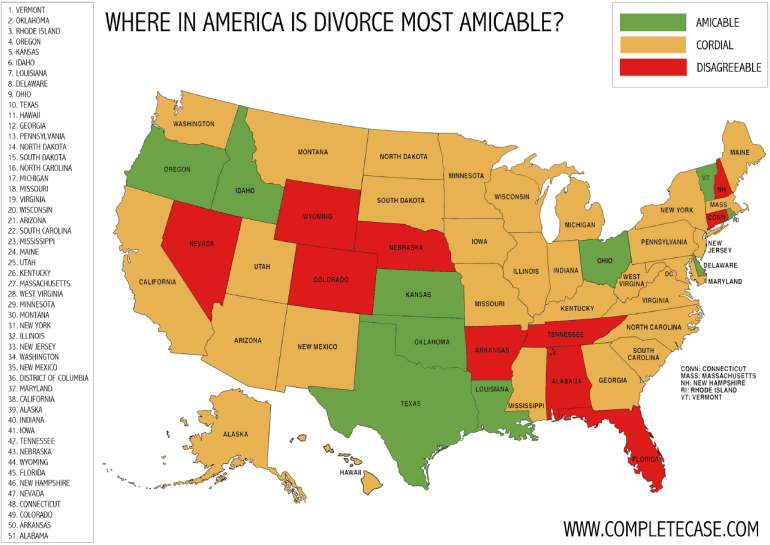 As I previously advised, the best way to have an amicable breakup is to execute a prenup before you walk down the aisle to avoid a messy divorce later, select an attorney you feel at ease with for the divorce process, and, lastly, consider mediation before heading to the courtroom for your divorce proceedings.