Since marriage and divorce law is left to each state’s government, rather than to the federal government, strange – and even unsettling – laws exist on the books regarding the joining of two people and the subsequent dissolution of a marriage. I’ve compiled some of the most bizarre marriage and divorce laws in a number of states so you can have a better idea of the dos and don’ts in the state where you chose to say “I Do” or “I Don’t.”

Hawaii, Illinois, Mississippi, New Hampshire, New Mexico, North Carolina, South Dakota, and Utah: Mistresses beware: a spouse can sue a third-party who is found guilty of contributing to the failure of a marriage in these states.

Delaware: If you entered into marriage too hastily in Delaware, blame it on a good old-fashioned game of truth or dare. A couple can file an annulment if they wed as a “dare” or “jest.”

New York: In the Empire State, if you earned a law degree, medical degree or another professional degree, the value of the degree is considered marital property. The spouse has to compensate for the degree or license’s earning potential when dividing property.

Also in New York, if one spouse develops a mental illness during the marriage and it continues for at least five years of the marriage, the other spouse may have to pay support indefinitely to treat the other’s illness.

Texas: Like gay marriage, gay divorce is also illegal in the Lone Star state. Even gay couples that married legally in a gay-friendly state are not allowed to obtain a divorce in Texas.

South Carolina – This no-nonsense state forbids any man over the age of 16 to propose with any false intentions. If he jokingly gets down on one knee, he’s committing a misdemeanor under the Offenses Against Morality and Decency Act.

Kansas: In Wichita, Kansas, a spouse will not be granted a divorce due to a lack of affection toward a mother-in-law. 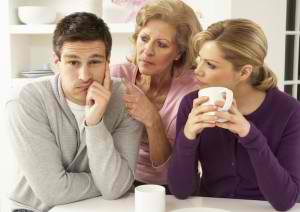 Whether it’s a law degree or your mother-in-law, whatever the obstacles that you’re facing with your divorce – we’re here for you.