This is part one of a two-part series on the increase of the divorce rate for people over 50. Part two will discuss how divorcing at an older age is different and what you need to know before heading into “gray divorce.”

The increased divorce rate among individuals over the age of 50 has become so prevalent the phenomenon has been given a name: gray divorce. What was once thought of as a mortal sin is now becoming more widely accepted among the older population. Even the Pope has urged the Catholic church to welcome divorced Catholics with ”open doors.”

Just How Big is the Phenomenon?

Though divorce rates among younger individuals have stabilized, the same can’t be said for the older population. Since 1990, the divorce rate among Americans over the age of 50 has doubled. One out of every four people going through a divorce in the U.S. is over 50, according to The Washington Post. The rate among those over 65 has more than doubled. 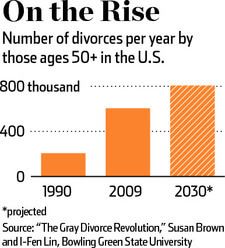 As I have mentioned before in “Why Divorce Rates Are on the Decline,” a divorce is generally initiated by the woman, which has been proven true across all age groups. So why are older women handing over divorce papers more frequently now than ever before?

The above-mentioned article reported that sociologists Susan L. Brown and I-Fen Lin at Brown University discovered it wasn’t health problems, adultery, or money that was a particular driving force between older couples splitting up after so many years. Rather, it was simply growing apart that drove couples to divorce – much like when Al and Tipper Gore announced to a shocked world they would be seeking a divorce after 40 years of marriage and four children.

“It’s not as if marital quality has suddenly declined. Instead, I think we have higher expectations now for what constitutes a successful marriage. We expect spouses to be best friends and marriage a source of happiness and fulfillment,” Brown said.

“For those in good health and with financial resources, a gray divorce may mean an era of freedom and independence,” said Brown.

“As marriage becomes more selective, and more tied to education than in the past, that could help stabilize marriages,” Brown said.

“These younger, more selective couples won’t pour all their time and energy into work and their kids, as Baby Boomers did, but save some time for each other. So when the time inevitably comes when work is over and the kids are gone, they won’t find themselves staring across a silent dinner table at a stranger,” said Historian Stephanie Coontz.