I often talk to young people in college who ask me for career advice. They know they want to go to law school after they graduate and ask about classes they should take and in what curriculum they should major in.

I’m not really the best person to answer those questions. I had no childhood or even young adult dreams of being a lawyer. In fact, I was a visual art major in college. My degree is a Bachelor of Visual Arts (BVA) in sculpture, which puts me in a rather exclusive club. You won’t find many lawyers with that degree. None in Georgia.

My law career began with a single conversation when I was in college at Georgia State University. I met with the Review Committee, including my professor, George Beasley. They told me “Harmon, you’re going to graduate in a couple of quarters.”

Maybe I’d just been enjoying myself too much to think about it. I had been too involved in projects like building an iron furnace that melted the iron to make sculptures. That was way more fun than thinking about the future.

After the meeting, I remember vividly walking down that long hallway from the office where the Review Committee met, and asking myself, “What am I going to do? I’m not going to make a good living making art.” I had been lucky enough to win some prizes and awards for my art but knew that translating that into a well paying career was another thing altogether. The financial reality of having an art degree was suddenly staring me in the face.

I considered my other options. I was working part-time for the First National Bank of Atlanta and knew that career path didn’t interest me. Somewhere along that walk down that 50-yard hallway, I decided. I would go to law school.

A few years later, I attended commencement ceremonies again, this time with a J.D. from the University of Georgia School of Law. This time, I knew what I was going to do – practice law.

Now, 38 years later, I can say that I’ve really enjoyed my career. I enjoy representing folks and love the intellectual challenge of getting a good result for my clients.

So back to that question about the best undergraduate major if you want to go to law school. I did a little digging to find out which majors did the best on the LSATs and found this interesting chart that has the mean LSAT and UGPA (undergraduate grade point average) by college major for law school applicants in 2013. 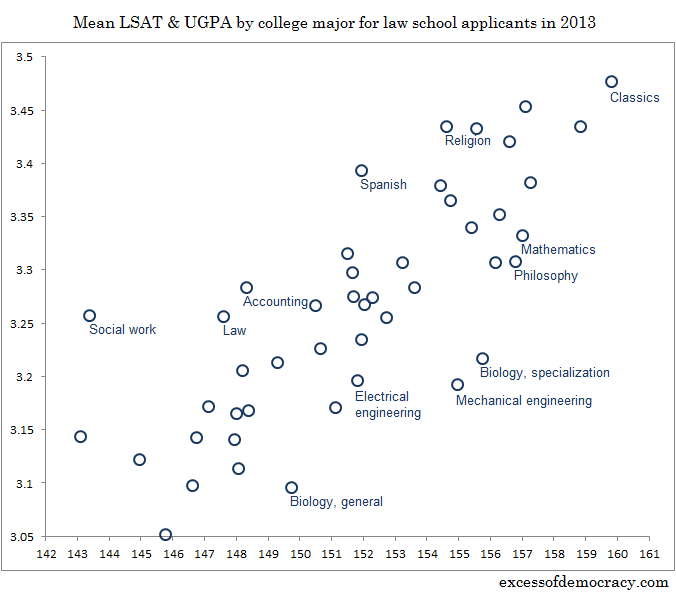 As you can see, the Classics majors lead the pack in both, with Religion and Spanish following behind. Those who said they majored in Law, (I guess that’s some type of pre-law program,) didn’t seem to do as well on the LSAT. Biology majors had lower UGPAs but I imagine that’s because of their more demanding workload.

From my experience, for a career in law, your major in college doesn’t matter a great deal. The advice I’ve seen and that I can confidently pass along to you is simple: pick a major you are interested in, and get the best grades you can in that major.

And if that major happens to be art? Well, art majors go to law school, too.

Click here for a video of Harmon telling this story.